Visit Tunis: What are the best things to do and see in the Tunisian capital?

Tunis , the capital of Tunisia, is located on a hill on the shores of Lake Tunis, a few kilometers from the Mediterranean coast of Africa. It is one of the most laid-back cities in North Africa, with its exotic charm. The city center is old, dating back to the Ottoman Empire, but it is surrounded by the infrastructure of a modern Arab city, so you will see its two faces. Tunis is a good choice for cultural holidays, with two World Heritage sites and hundreds of historical monuments. Due to possible political unrest, as was the case in the summer of 2011, travelers to Tunisia should regularly check the site France Diplomatie ( diplomatie.gouv.fr). If all fires are green for your trip to Tunisia, discover the best things to do in Tunis .

The remains of ancient Carthage, rich and legendary maritime city of the Phoenicians, are scattered along the Gulf of Tunis. The ruined columns and piles of marble rubble are lined by a panorama of the Mediterranean Sea, which was so fundamental to the prosperity of the city. Entirely destroyed during the Third Punic War in 146 BC, the remaining ruins are nothing compared to some of the other ancient sites of North Africa, but that does not mean you should not visit them. With a beautiful setting on the seafront, the remains have an incomparable air, as lost in time. Various sites streak along the bay and are easily accessible on foot or by the use of the light rail of Tunis. Do not miss the view from the top of Byrsa Hill . 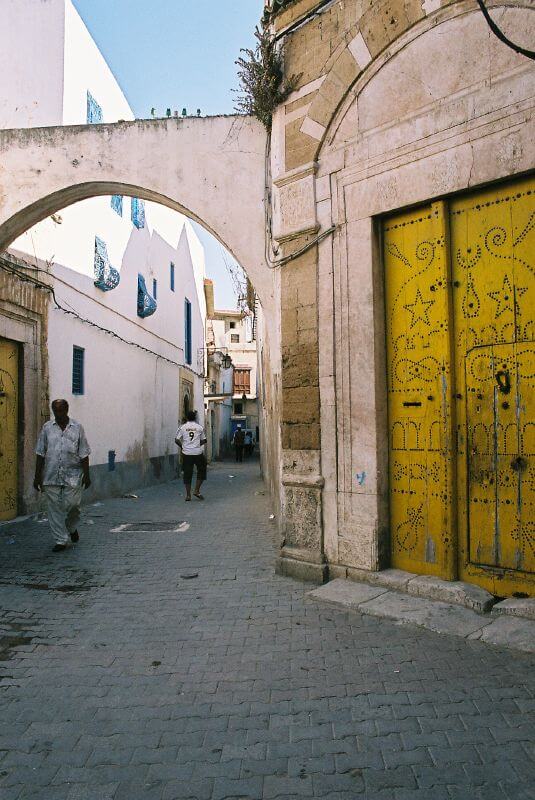 You will find innumerable dilapidated buildings crisscrossing the parade of narrow streets just as the others: the district of the medina (old town) is the historical heart of Tunis and is full of sites to see. The main gateway, marking the end of the new city and the beginning of the medina is known as Bab el Bahr(“Gate of the sea”). Built in 1848, it was known as the “Porte de France” during the colonial period. The old city walls of the Hafsid period may have disappeared (in part) for a long time, but once inside the mosques, madrassas (schools) and mausoleums, you can admire the sumptuous works of tiling and the splendid lines of Fatimid and Ottoman architecture in the winding streets. Getting lost in the meanders and falling on a fabulous monumental vestige is only part of your pleasure …

Here is a map of the medina of Tunis: 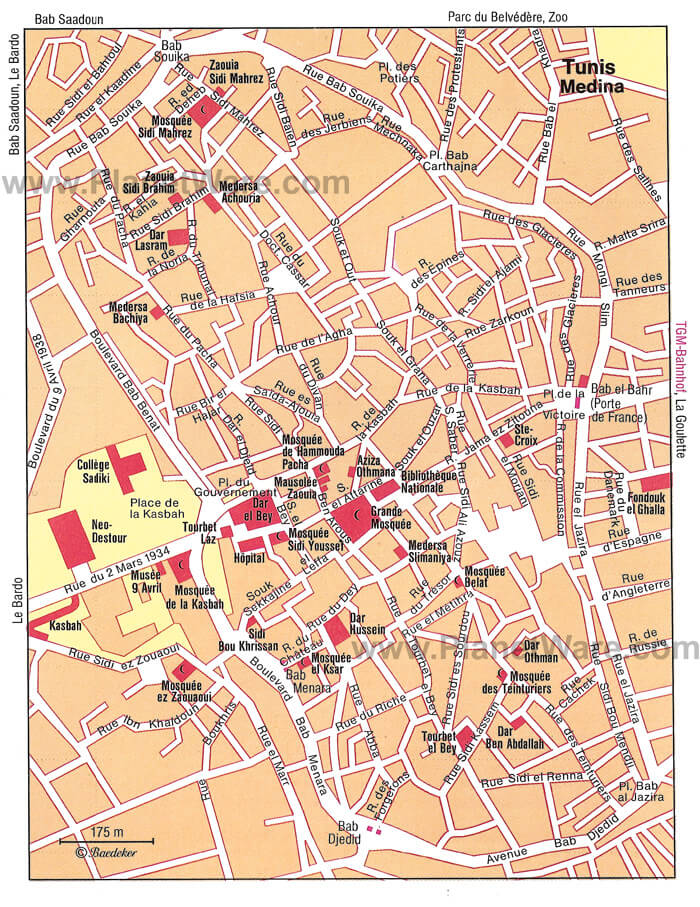 … marketers will be heading to the Souk des Chéchias , where traditional Tunisian woolen hat makers have had their workshops for centuries. The area between Djemma ez Zaitouna Street and Kasbah Street is where most of the souvenir shops are gathered. 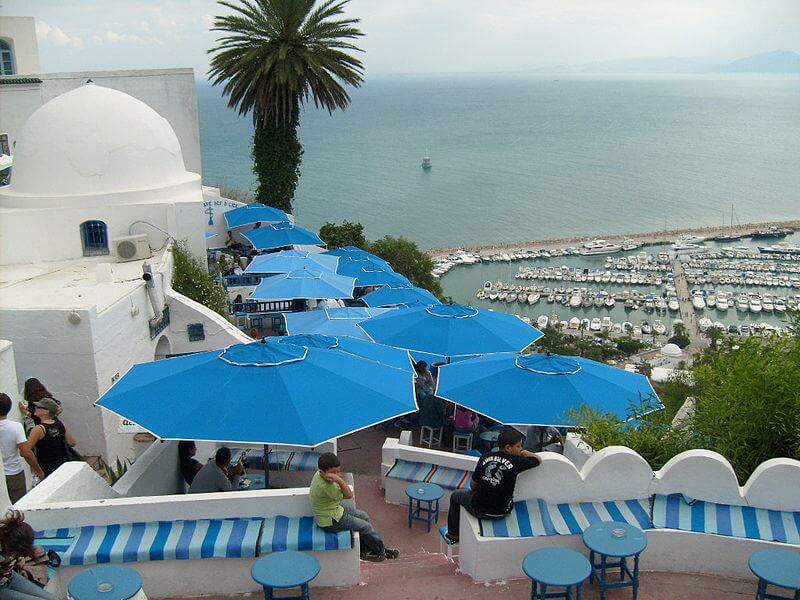 The beautiful Andalusian-style coastal district of Sidi Bou Said owes its fame to three young painters. While traveling here in 1914, Paul Klee, August Macke and Louis Moilliet captured the beauty of whitewashed buildings and blue doors on canvas. Since then, the district of Sidi Bou Said has something artistic and bohemian, and it is a place of privileged escape for the locals the weekend. Very touristy (this is part of its charm), you can not fail to be seduced by the perfectly white and blue streets, cafes leaning against the cliffs (including the famous Café des Délices ) and the view on the coast.

I also recommend you to read our article: Itinerary: One Day in Carthage & Sidi Bou Said – 2018 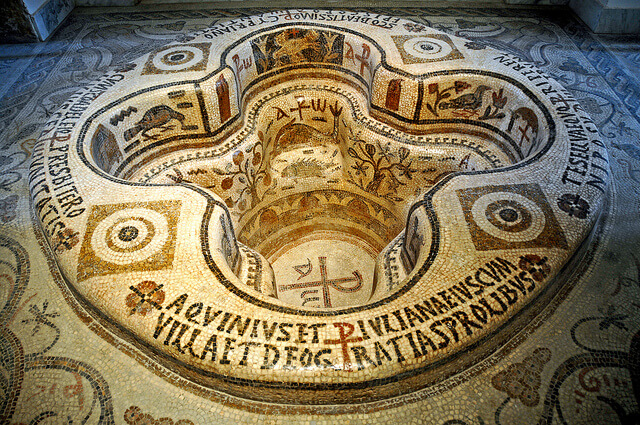 One of the most beautiful and largest collections of Roman mosaics in the world lies in a sumptuous palace of Tunis. The Bardo is the second museum on the African continent after the Egyptian Museum in Cairo. Inside, room after room are presented examples of rich and intricate art mosaics that have been discovered in sites throughout all of Tunisia. The Sousse, Ulysses and Dougga Halls have particularly impressive displays of this art form, but the entire collection is a treasure and is well worth an afternoon to devote to it or even a day. The ground floor of the building includes interesting non-mosaic exhibits with exhibits from the neo-Punic, Christian, and Islamic eras.

5. Zitouna mosque, or mosque of the olive tree 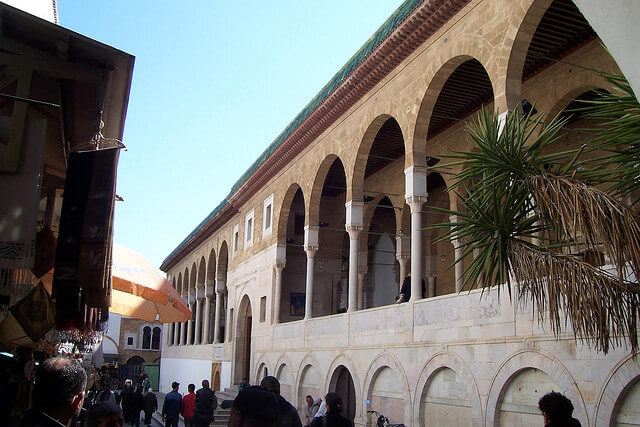 The Grand Mosque of the Medina district is home to some of the finest examples of religious architecture in the country. Undertaken during the Umayyad Dynasty in the year 732, it was modified and refined by the conquering empires in the centuries that followed. Although non-Muslims can not enter the prayer room, visitors are free to walk around the opulent and tranquil outdoor courtyard, but also to go to the rooftop where dazzling mosaics are on display. The roof is also one of the best places in the Medina to take panoramic pictures of the surroundings. 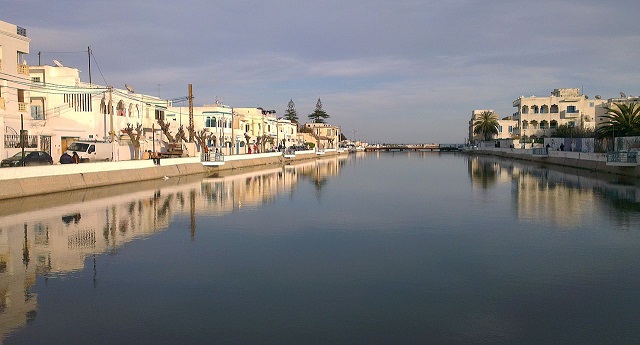 La Goulette is the port suburb of the Tunisian capital and has been a place of strategic importance (controlling the entrance to the port) since always. Under the reign of Emperor Charles V, it was the most important Spanish possession in the Eastern Maghreb. From 1574, the Ottoman rulers enlarged and strengthened the fortress built by Spain. La Goulettebecame a port only during the French colonial period, when the lake of Tunis settled down and could no longer take any ship, whatever their size.

La Goulette has Spanish and Ottoman forts to explore and the gate of the Old Arsenal (on the road to Tunis). If you only want to soak up the sea air, the coastal road (avenue Franklin Roosevelt) is a nice place to walk in La Goulette. Beyond the modern port, the long sandy beach is one of the best places in the city to spend an evening and relax on weekends. 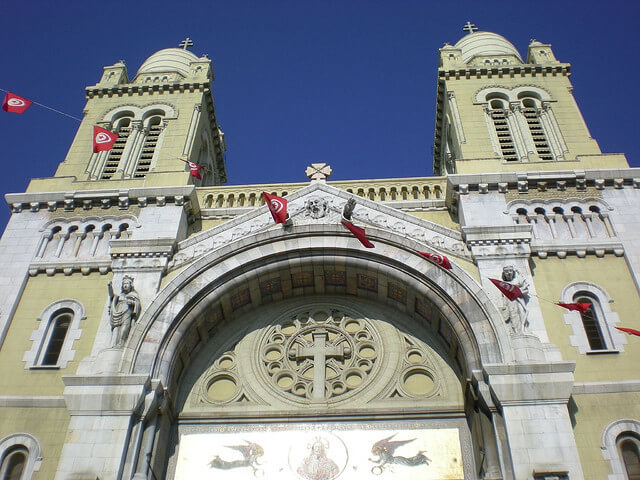 In the New City of Tunis is this imposing cathedral, the largest surviving building of the French colonial period in Tunisia. Its voluminous Moorish, Gothic and Neo-Byzantine style facade majestically presides over the northern end of Independence Square . It was, at the time of its construction in 1893, a monument that recalled the domination of France over the country. Inside the cathedral is the tomb of the Unknown Soldier.

8. The New City of Tunis

Very far from the tangle of alleys of the Medina, the New Town of Tunis was developed in the French colonial era. Its main core is Habib Bourguiba Avenue , a magnificent and large avenue lined with palm and eucalyptus trees. Perfect straight line, the avenue goes east, just outside the medina on Independence Square towards the port.

Architecture enthusiasts will appreciate the marvelous mix of colonial and post-colonial buildings along Habib Bourguiba Avenue, from the modernist inverted pyramid at Hotel du Lac to the most distinguished European-style government buildings. At the intersection with Avenue Mohammed V, the Place d’Afrique presents a Clock Tower symbolizing the modern era of Tunisia. 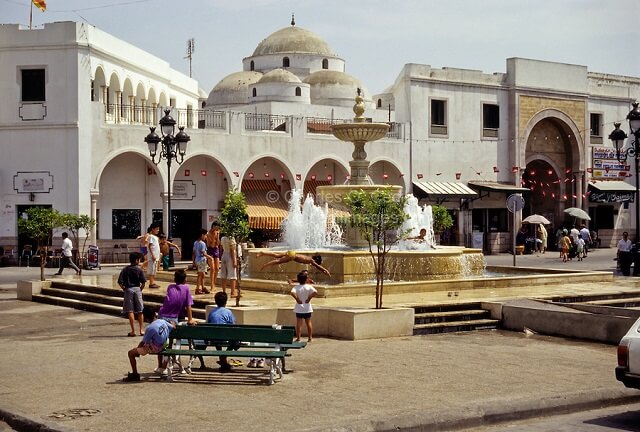 This Ottoman-style mosque is named after Mohamed Mahrez As-Siddiq (the so-called “ascetic”), which is the Islamic equivalent of a patron saint of the city. It is an elegant building topped with nine white domes. Mahrez played a vital role after the plunder of Tunis in the year 944, encouraging citizens to rebuild and develop trade and industry. He is buried in front of the mosque. The mosque is considered the most beautiful of Tunis

10. Other sites to visit in Tunis

If you spend more than one weekend in Tunis, you will certainly have time to visit other places and heritage of the capital. Here are some ideas:

How to get to Tunis? Where to stay in Tunis?

Late spring and autumn are the best seasons to travel to Tunis. Tunis has its own airport (Tunis-Carthage), served by direct flights from Lyon, Paris, Marseille, Toulouse, Nantes, Strasbourg, Nice, Bordeaux … The companies Transavia, Air France and Tunisair are the main companies for this destination.

All our itineraries and tips for travelling Tunisia is Here.