What’s the crime rate in Africa? In which country do we recommend that tourists never put their nose outside, under penalty of being attacked? Check out Africa crime rate 2018 before heading to Africa. In Africa, the first country that comes to mind is, of course, South Africa, plagued by violence. This is a fact confirmed by the Crime index Mid-year, published by Numbeo.

Of the African cities with the highest crime rate, the top 4 are South African and 6 of the top 7 belong to the Rainbow nation. The first of all is Pietermaritzburg, the capital of Kwazulu-Natal and its second largest city. It is a city where blacks (60%), whites of European origin (14%) and Indians (8.4%) cohabit, for a total population of only 223,000 inhabitants.

This locality is followed by Johannesburg, Pretoria, and Durban with scores all as close to each other. These big cities are known to be infrequent places, as confirmed by all the people who have stayed there once.

Last year, for example, four MPs, including one Senegalese, were victims of a serious assault just landed at the Johannesburg airport to attend the meeting of African women parliamentarians. 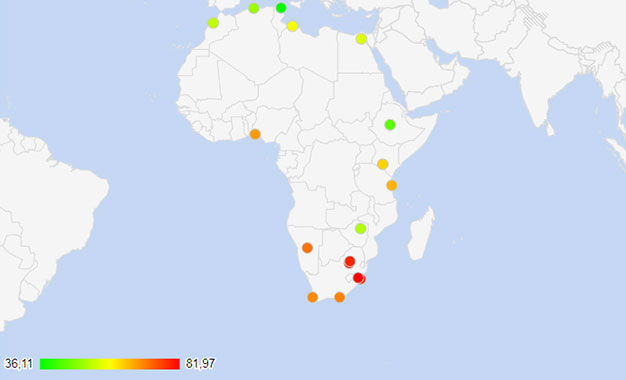 Tunis has just been ranked 17th among the least secure cities in Africa, where the crime rate is quite high.

According to the latest ranking, the crime index of Tunis is relatively low (36.11) and that of security is relatively high (63.89).

The Tunisian capital is thus a rather peaceful city, compared to several other African capitals.

Tunis is, indeed, ranked far behind the most dangerous cities in Africa, which are Pietermaritzburg, Johannesburg, Pretoria and Durban (South Africa) and Windhoek (Namibia). 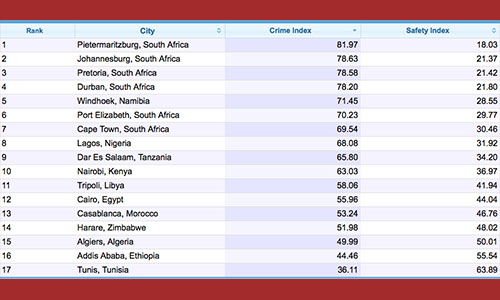 Note that the crime index is an estimate of the overall level of crime in a city or country. If it is less than 20, the crime index, which is opposite to the safety index, can be considered as very low. On the other hand, if it is greater than 80, it is considered very high.

I also recommend you to read our article: How to Avoid Pickpockets and Thieves?

According to the current U.S. Department of State Travel Advisory at the date of this report’s publication, South Africa has been assessed as Level 2: Exercise increased caution.

Of particular concern are home invasion robberies. These crimes are often violent and can occur at any time. In many cases, criminals prefer to attack when the occupants are home or arriving/leaving because the residential alarm is off and the occupants can identify where valuables are kept. Often occurring in conjunction with home invasions, the majority of reported carjackings occurs when the victim pulls into their driveway or entrance gate, and the carjackers can pull up behind the victim to block their escape. When arriving at a residence, wait inside the vehicle on the street until the vehicle gate is open before pulling into the residence. This will provide you an escape route if confronted. Victims who resist or fail to comply with demands may be killed or seriously injured. In many scenarios, robbers force the victim into the house; rob the house of its valuables, and take the vehicle.

South Africa has one of the highest rates of rape in the world. While not specifically targeted, foreigners are often victims.

Financial and identity theft crimes, including debit/credit card and advance-fee scams, are common. Most businesses (gas stations, restaurants) have portable credit card machines that are brought to the customer to allow them to swipe their card. Despite these safeguards, cards are frequently cloned, resulting in fraudulent charges. ATM fraud includes the placement of a skimming device on the ATM itself or the ruse of a “helpful citizen” who offers to assist. For more information, please review OSAC’s Report, “The Overseas Traveler’s Guide to ATM Skimmers & Fraud.”

Identity theft remains a significant concern due to several contributing factors: SIM swap fraud, a strong infrastructure of money wiring services, readily available internet, prepaid cell phones, high levels of corruption in many companies and government agencies, and lack of police resources/expertise. The U.S. Mission has worked with U.S. citizens who reported their mail was opened, re-routed, or tampered with at the local post office and later learned the perpetrators assumed their identity. Others have reported that their U.S. passport biographical page was photocopied at hotels during their travels in Africa (standard operating procedure), was altered (photoshopped), and used in romance or tax scams against South African and U.S. citizens.

The U.S. Department of State has assessed Pretoria, Johannesburg, Cape Town, and Durban as being MEDIUM-threat locations for terrorist activity directed at or affecting official U.S. government interests.

In 2016, there was an increase in terrorist threats in South Africa that resulted in the U.S. Department of State raising the threat level at all South African U.S. Mission locations from LOW to MEDIUM. Some recent incidents included:

While the highway system and toll roads are generally in good condition, automobile accidents are the highest single risk to drivers and pedestrians. South Africa has a high rate of fatal traffic accidents; according to the South African Automobile Association there were 14,071 fatal crashes in 2016. This is due to dangerous driving practices, speeding, alcohol abuse, slow and un-roadworthy vehicles, the condition of the road surfaces, and the frequent presence of pedestrians/animals in the road outside of large cities.

Criminals may target vehicles on the highways — seldom during daylight hours — typically by placing debris in the road and waiting for a vehicle to stop after hitting the object. In another frequently used tactic, an individual (or several working together) with a vehicle on the side of the road with an apparent mechanical problem may attempt to flag down passing traffic for help. When a passerby stops, s/he is robbed of valuables and sometimes his/her car is stolen or s/he is assaulted. Call 10-111 (nationwide emergency police number) to report the vehicle’s location so that the authorities can respond.

South Africa is the largest market for illicit drugs in sub-Saharan Africa and serves as a transshipment point for cocaine and heroin primarily destined for Europe.

Heroin, primarily of Afghan origin, typically arrives via ports in Tanzania, Kenya, and Mozambique from Southwest Asia before being subsequently smuggled by land into South Africa, often transiting Zambia and Botswana. Heroin not consumed within South Africa is trafficked via air to Europe, although a small percentage is shipped to the United States.

Cannabis is the most commonly used illicit drug in South Africa. A dangerous trend that has emerged in poorer communities is the use of a combination of heroin and marijuana called “nyaope.” Such drugs are often adulterated with other toxic substances.