Tips for a Great Stay in Kuching

For me, Malaysia was such a country that I look back with mixed feelings. Not that I did not like it, but somehow Malaysia did not beat me. It was nice, but somehow that certain something was missing. There were of course highlights such as Pulau Pangkor, Penang or the Cameron Highlands. But there were places that did not convince me, like the Perhentian Islands, A really bad salmonella poisoning did the rest, so that I could not enjoy Malaysia for a week. My plans to do a diving course were gone because I could barely stand on my legs. But in the end I found a place that somehow reconciled me to Malaysia: Kuching, the largest city on the island of Borneo, really did it to me.

After one week of suffering on the Perhentians, I decided it’s time for new ways and a trip to the hospital (which I could prevent, since there was a pharmacy at the airport in Kota Bharu that sold antibiotics without a prescription) ,

At this point, a big thank you to my better half, that he has also dragged my backpack, because I was not able to do so.

6 kilos lighter, so I arrived on Borneo, still very weak, but the antibiotics began to work already. So I was able to enjoy the city on the taxi from the airport to our hotel. I liked what I saw at first glance.

It was so different from the mainland, more modern, people smiled more. We felt welcome even though we were in the largest city on Borneo. Also in the hotel we were more than welcome and after the expensive but not exactly nice accommodation on the Perhentians was our hotel balm for the soul. 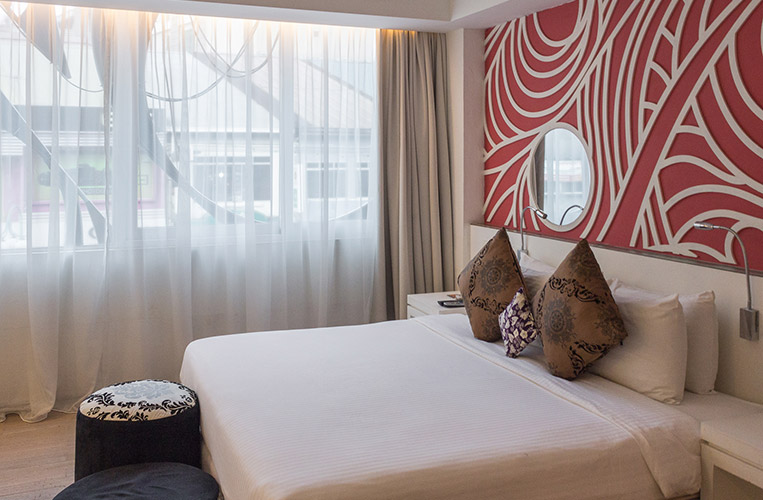 The Batik Boutique Hotel in Kuching

Kuching is the capital of the state of Sarawak and the largest city on Borneo. Incidentally, Kuching means cat, why the city has this name is not known. However, there is a beautiful legend: The adventurer James Brooke has asked one of the locals on his arrival in Kuching what the name of the city is. At that moment, a cat ran across the path and the Malaie thought he was being asked for the name of the animal. So the answer was Kuching, the cat. In the whole city you can find cat statues, pictures of cats and there is even a cat museum, if you have to see that is another thing … 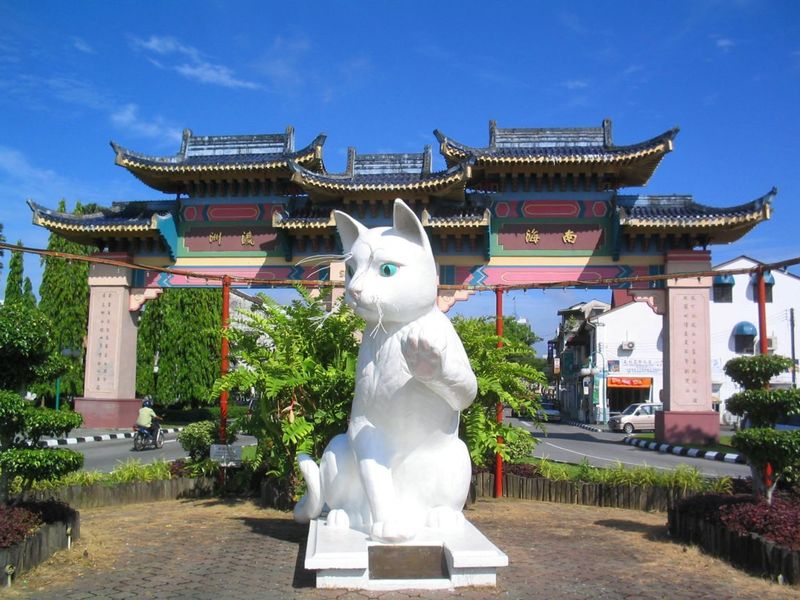 However, the river bank of Kuching with the wonderful view of the white Astana Palace, the seat of the governor, is really worth seeing .

Otherwise, Kuching does not have many attractions to offer, but the city is the gateway to the rainforests of Borneo. Only half an hour outside the city are national parks and reserves where you can visit the endangered orangutans and have the opportunity to see proboscis monkeys. 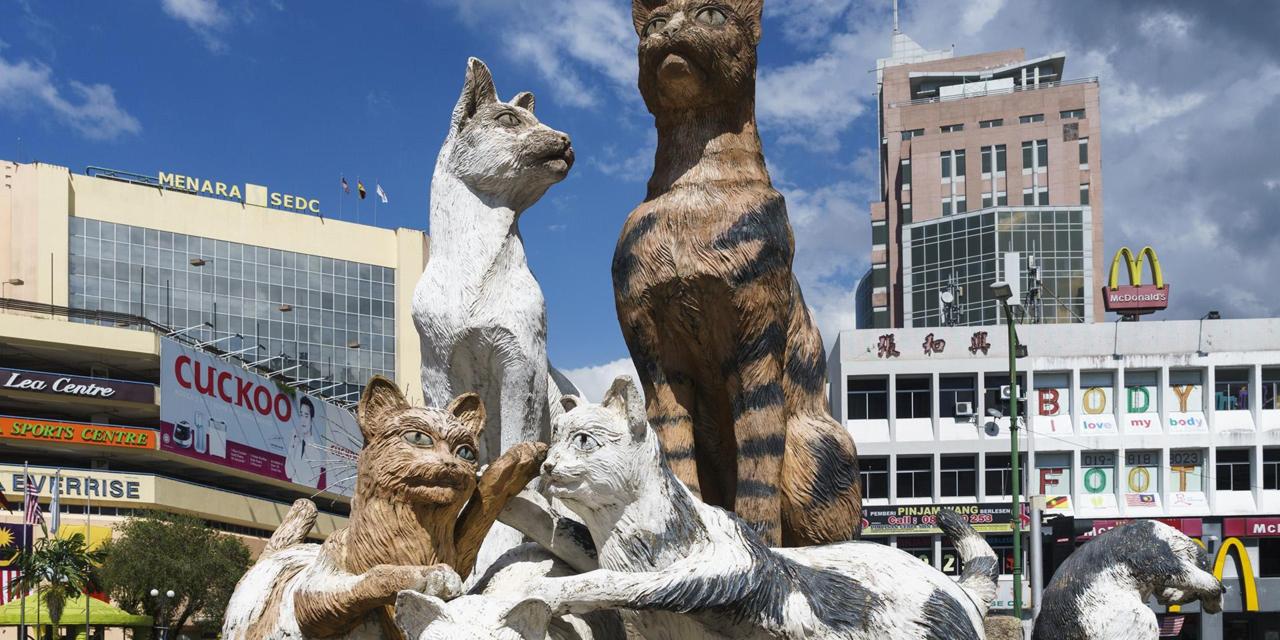 In the Semenggoh Nature Reserve you can experience semi-wild orangutans up close. Considering that these imposing animals are threatened with extinction and live today only on Borneo and Sumatra, you should not miss this. Semenggoh was once founded as a sanctuary for wounded and captive-released orangutans.

Today, the reserve is home to many of these half-wild monkeys. They live in the wild, but come regularly to the feeding times in the feeding grounds in the park to pick up your food. 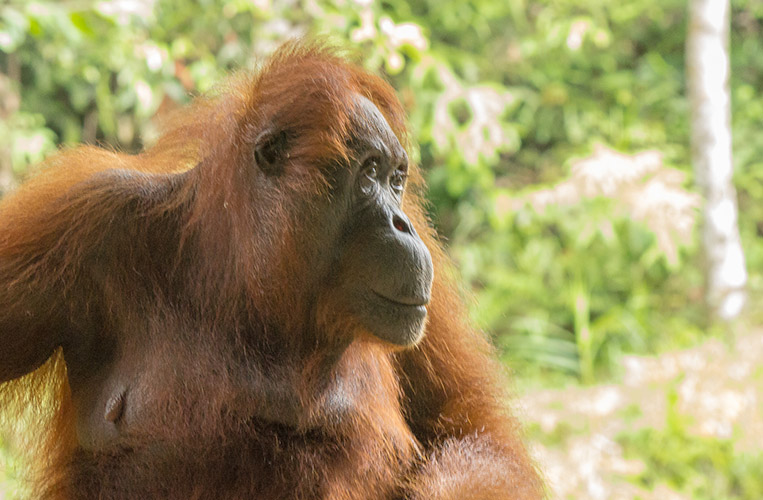 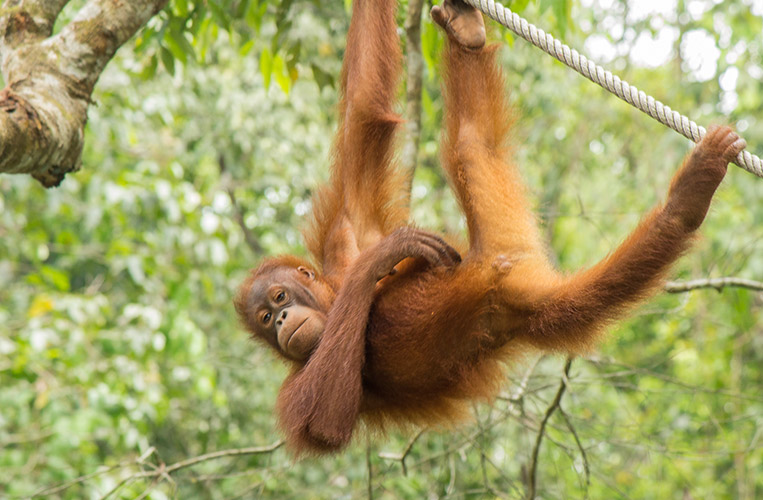 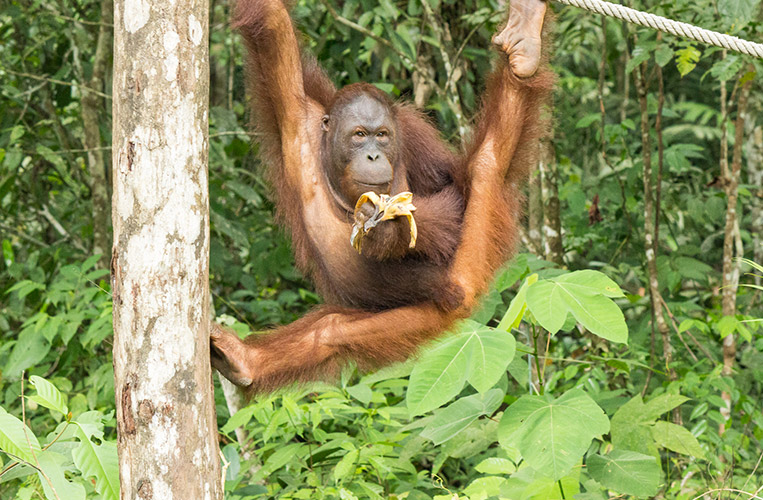 There are no fences here and the monkeys are really half wild, the whole thing has nothing to do with a zoo visit. We were lucky that we really saw many of the impressive animals. In the fruit season, you may be less fortunate, as the orangutans find enough food in the wild at that time and rarely come to the feeding sites.

Tip: Do not book any of the expensive guided trips to Semenggoh. You can take public bus number 6 from the bus terminal at the Grand Mosque directly to the reserve and back. Feeding takes place from 9-10 o’clock and from 15-16 o’clock. At noon, the park is closed, so that the monkeys have their rest.

The Bako National Park is the smallest and oldest national park in Malaysia, but I think one of the most interesting, because here you have the opportunity to observe the famous proboscis monkeys, which exist exclusively on Borneo.

The Bako National Park is also home to countless tours of reputable and less respectable providers, but you can also simply take bus number 1, which also leaves at the mosque, to the terminus. The journey takes about 1 hour. At the Bako Market terminus you go to the boat jetty and take one of the longboats to the park. You should be here as early as possible, as the boats only go at high tide and you have to wait at low tide first.

If the water level is not high enough, you will not be let out at the jetty, but in the shallow water. From here you have to walk to the beach. The whole thing is a little disgusting, because the reason here is very muddy and muddy, but well we had to go through. We were a bit late! 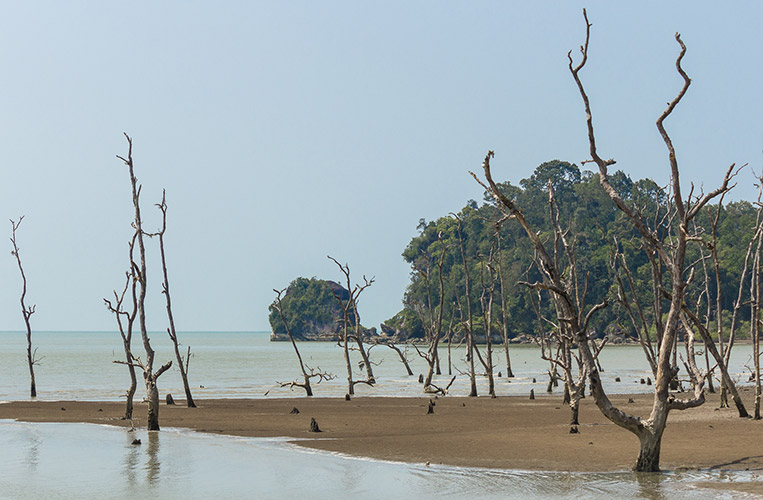 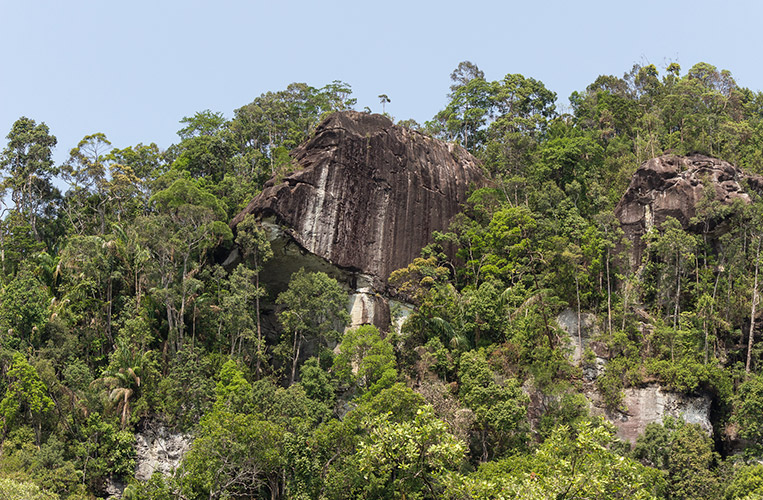 Once in the National Park, you must first register and tell which of the 16 different routes you plan to walk and how long you intend to stay. From multi-day routes over short tours, there is everything your heart desires.

But even the short trekking tours are very exhausting, as they really go right through the jungle, there are practically no paths, it really goes over roots, stick and stone.

No matter which of the tours you do, your chances are to see next to the famous proboscis monkeys and cameroon monkeys, bearded pigs, gibbons, wild cats and warans live and up close. In addition to mangrove and heath forests, there are white sand beaches, waterfalls and plateaus with breathtaking views. Some of the secluded coves in the park invite you to go swimming. 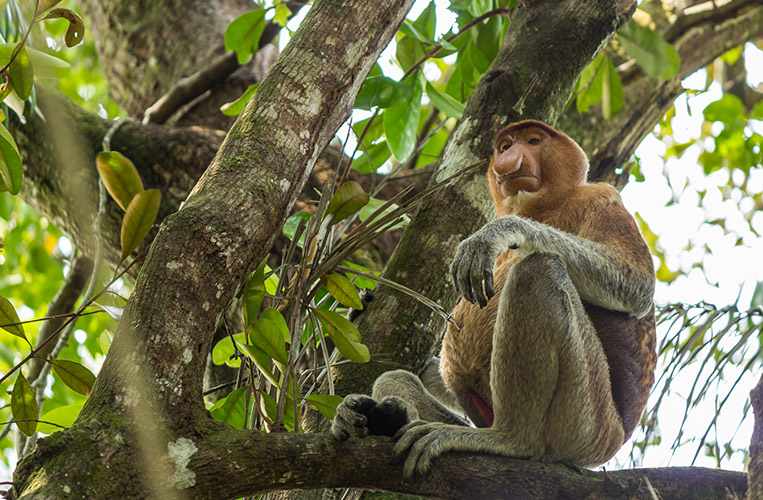 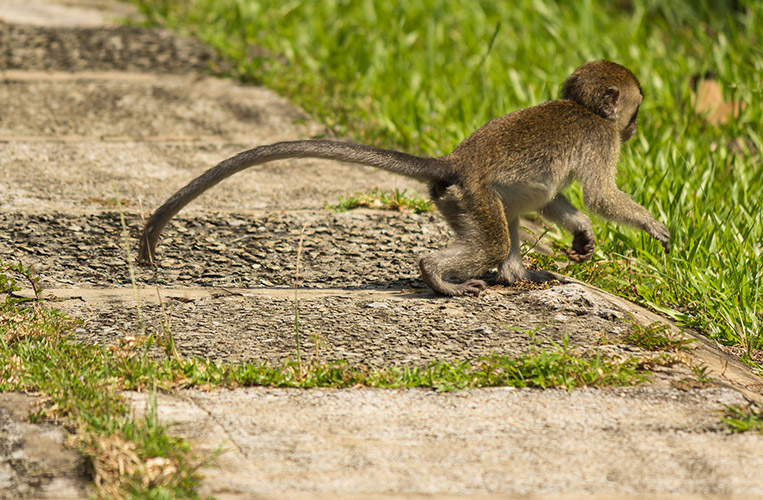 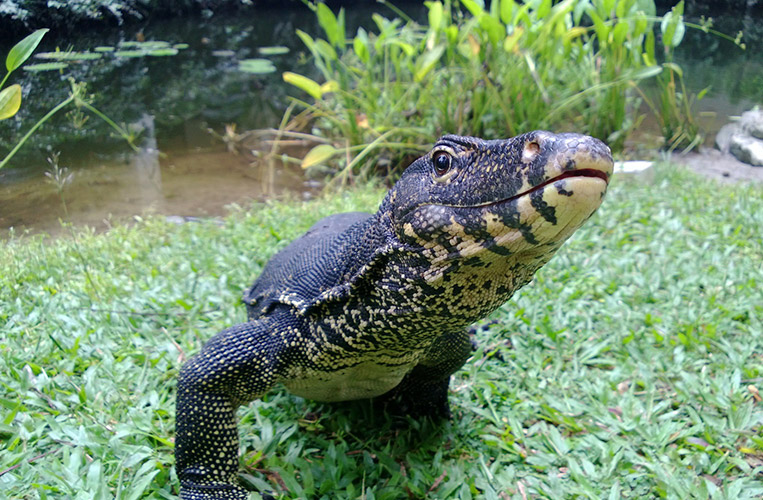 Furthermore, from Kuching you can take a trip to Iban’s longhouses or, if you have less time, at least pay a visit to the Sarawak Cultural Village museum village on Santubong Mountain to learn more about the area’s locals. 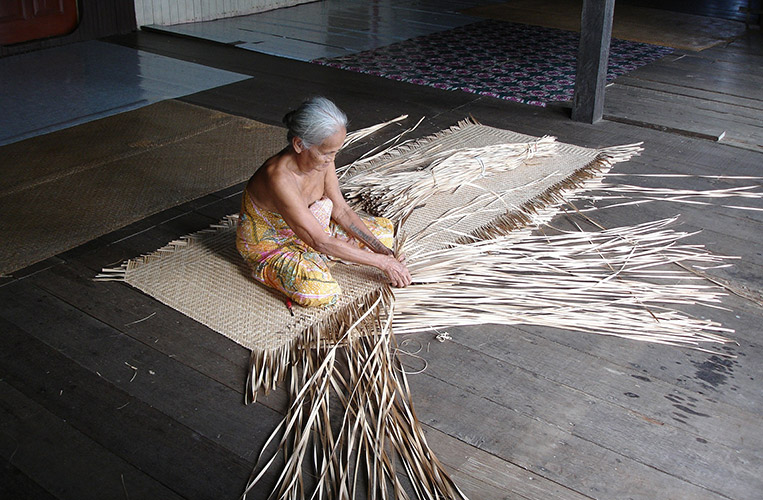 About 2 hours from Kuching is the Gunung Gading National Park where, if you’re lucky, you’ll see one of the famous Rafflesias. The Rafflesia is the biggest world with a flowering of up to half a meter in diameter and smells like the plague! However, the Rafflesia flowers only 3 days before it withers. It is therefore worth calling in advance in the park and ask if a visit makes sense.

In Kubah National Park, also just half an hour from Kuching, if you are lucky you can discover Asia’s smallest frog. But even if you do not find it, you will certainly see one of the 190 different frog and toad species that are native to this area. After all, the Kubah is “The Home of Palms and Frogs”.

At the beginning of our stay in Kuching I was served by the Asian cuisine first and had animal longing night western food. After such a long illness you have to listen to his body, so I ate the first evening in Kuching not Asian but French.

At the Zinc, you will receive a very personal welcome from the charming French boss and her Malay husband. In addition to excellent service, the Zinc but especially with very delicious cocktails, French and Mediterranean dishes such as tarte flambée and delicious salads score. Everything was super fresh and delicious! My personal highlight after the long illness, however, was the cheese platter and French baguette! I was in the cheese paradise! 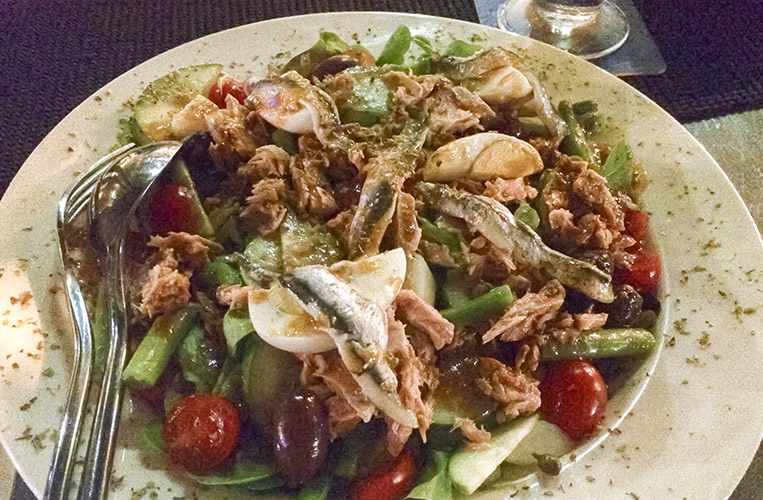 After that evening I was ready again to try the Asian cuisine in Kuching. Luckily, otherwise I would have missed something in the Top Spot Food Court .

The food court is located on the upper deck of a parking garage, not the most normal of all locations, but totally worn out. And here is the best seafood in town!

At one of the many different food stalls you can choose your fish and your seafood and let it cook to your taste. The price goes by weight. There are also various vegetable side dishes.

The best fish and the largest selection are available at booth number 25. You should try the butter prawns and fried jungle fern, a typical dish from Borneo. 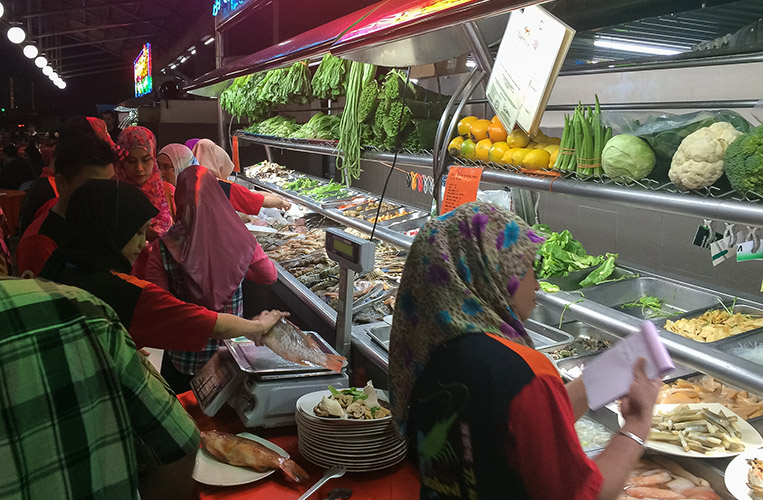 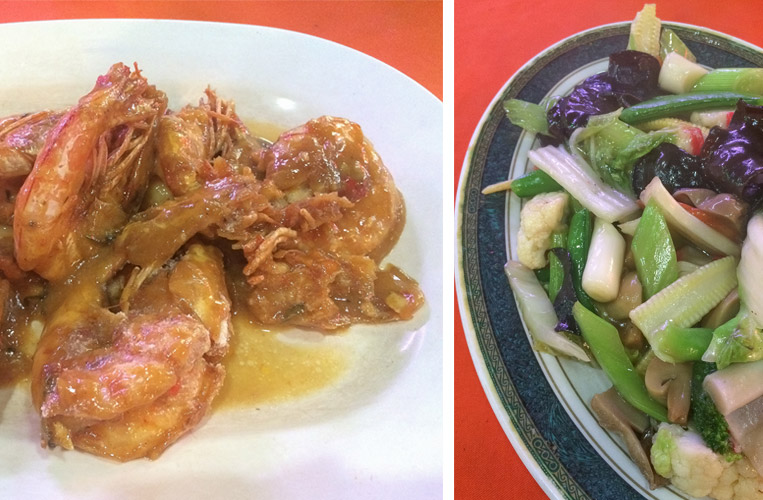 For those who are hungry or craving for something sweet, there are also food stalls with ice cream, sweet treats and you should try the freshly squeezed sugar cane juice (Air tebu) with lime and ice cream .

TIPS FOR GETTING TO KUCHING

Cheap airlines like AirAsia and Firefly offer very cheap flights from Kuala Lumpur, but also many other cities in Malaysia. The cheapest flights you can find at Skyscanner. The flight from Malaysia to Borneo takes about 1 hour.

From the airport to Kuching you have to take a taxi, there is no public transport. The ride is with 30 ringgit, about 6 euros, but not expensive.

Thanks again to the nice boss of the batik boutique hotel, who were so worried about me and my health, that she even let me drive to the airport from one of her girls at the end of our stay, so that I arrive well too.

Kuching was a good start on Borneo! But dear Borneo, we are not done together! I think you have so much more to offer and one day I will return to explore the rest and finally go diving. After all, you are known for the most beautiful diving spots in the world!

Have you ever been to Borneo? What fascinated you most? I’m looking forward to your commentary! 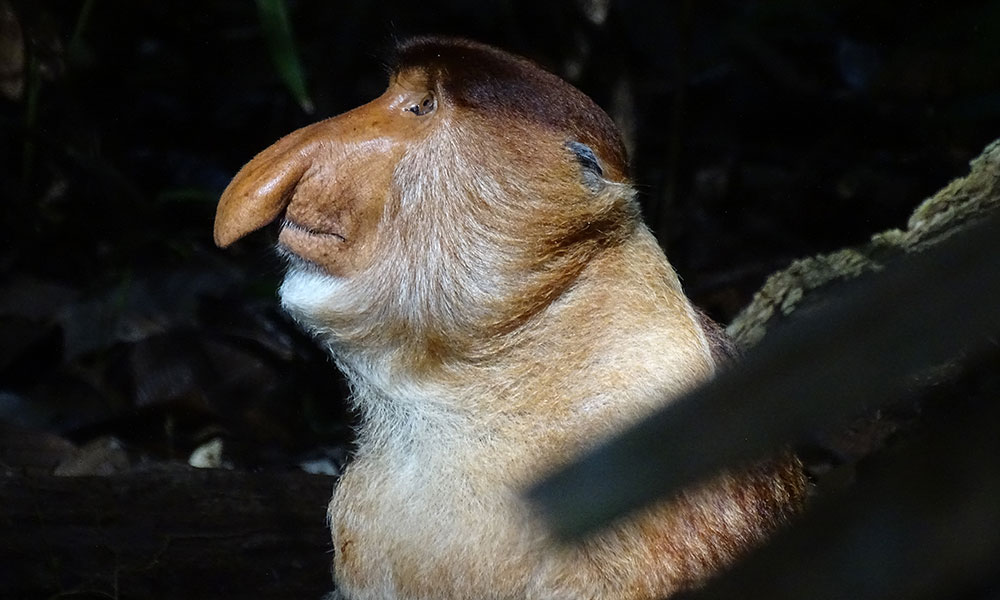